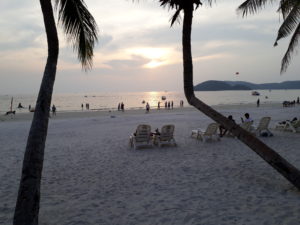 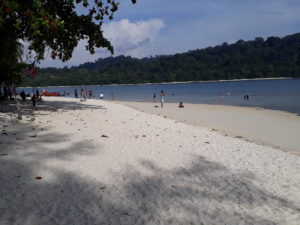 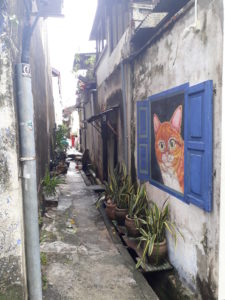 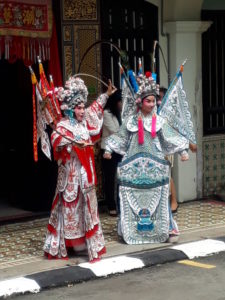 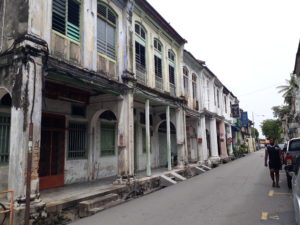 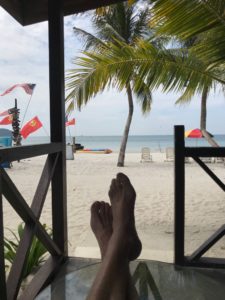 We spent a week in Kuala Lumpur , mainly chilling out and in my case getting a new pair of spectacles, eating and watching the torrential rain storms flooding the river on the golf course. We visited Batu Caves , a Hindu shrine achieved by climbing up a long flight of stairs to the cave. The shrine itself is more like a building site but the cave was very impressive.

Then we took an interminable train ride in a vibrating freezing cold train ride to Langkawi past thousands of palm trees. We took a taxi and ferry ride to our hotel which was right on the beach. The situation is rather idyllic , a long sandy beach, palm trees , hot humid weather ; a dreamy location. We spent the day lounging about bemoaning the fact that we don’t have Japanese service anymore.

KL is a mixed area , Malaysian, Indian and Chinese but Langkawi is predominantly Moslem and it’s sad to see the women dressed as unattractively as possible and their shy , off hand and rather abrupt manner of serving in the shops.

The attitude towards alcohol is quite puzzling. In KL one can buy anywhere , in Langkawi alcohol is available in some shops and restaurants but very expensive. In some restaurants they will allow you to take in alcohol. Then we discovered a duty free shop where foreigners , by showing passports ,can buy alcohol at greatly reduced prices. Locals can also buy but must show their I D cards but are rationed to for example 72 beers a month. Duty free shops are only available in Langkawi and things like coffee and biscuits are much cheaper.

I took a boat trip to three islands, one attractive inland lake and the feeding of eagles. Cenang comes alive at night, lots of restaurants, shops and everything busy, busy. We’ve enjoyed eating at the local places, good food and much cheaper. But Malaysia is a big contrast to Japan, the people are easy going, sometimes the service is done without a smile and nothing is finished off properly.

We took another freezing cold ferry ride to Penang in a rather dilapidated ferry. It got a bit rough out to sea and one of the passengers put his life jacket on because he thought his last day had come.

During the afternoon and night it threw it down and the next morning we awoke to a flooded hotel lobby and a city awash. This was the first time that the city had flooded in 15 years. Penang city is a fascinating place, a mixture of Buddhist , Chinese and Indian culture with old rundown chop houses ,restaurants ,temples, all looking poorly maintained but with a unique attraction. Some properties have been done up and are quite up market .Street eating is the order of the day with great food and a chance to meet other travellers.

By absolute luck Prince Charles and Camilla were visiting a puppet theatre next door to our hotel. They arrived in splendour and Carol shook Camilla’s hand and welcomed her to Penang.