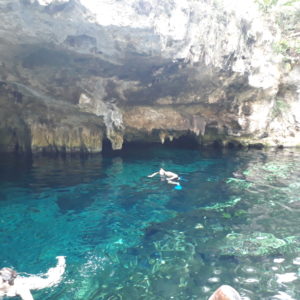 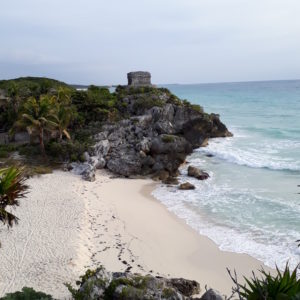 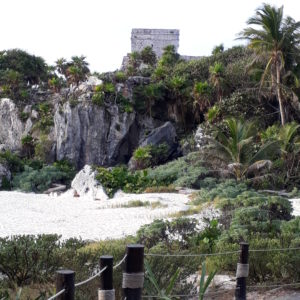 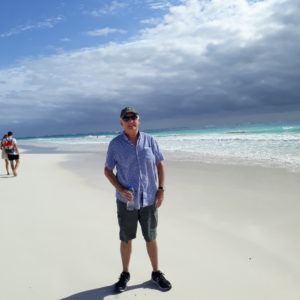 The Roger effect continued to click in , Patrick’s Uber wouldn’t work and mine was not connected to my credit card , so we did some frantic in putting of data before getting a taxi. On checking my passport details and ticket names didn’t correspond and I had an anxious one hour whilst I was shuttled back and forth from one airline to the next before receiving my boarding pass. We’ve found it important to check in 3 hours before a flight in case of hiccups.
When we arrived in Cancun there was no arranged driver to meet us so we caught a taxi to our homestay. This was in pitch darkness and nobody around seemed to know anything about the owners. The taxi driver took us to a hotel in town and we enjoyed grabbing something to eat at a local café next door.
The next morning it was pouring down with rain and we caught a bus to Tulum , a holiday town down the coast with very little charm. At the apartment where we stayed we were met by an Argentinian girl called Macarena , would you believe , from Argentina , another economic refugee from that country. We walked around the town with its tourist shops and cafes and broken pavements . We talked in the evening to an American retiree who came to Tulum twice a year to escape the harsh American winters. Its cheaper than USA and much warmer. Tulum has a bit of a reputation for being a hippy community and I liked the fact that everyone was walking about and using bicycles.
The following day we did the same and hired bikes and discovered why people come here. The Caribbean is gloriously turquoise and the sand white and fine. But the weather wasn’t really for the beach, so we rode on to the Maya ruins nearby, but beat a hasty retreat as it was horribly crowded. We decided to go back the next morning when it opened and we had the place more or less to ourselves. The Mayan ruins are beautiful , set on a cliff above the ocean and surrounded by bush and nice birds. As we were leaving the crowds started to pour in.
The next day we rode to a cenote , and swam in a natural pool formed by limestone , collapsing and forming natural underground clear tranquil water. The bicycle hire guy showed us a drawer full of unclaimed driving licences and passports of people who had lost bicycles. over the December and January period he collected 70 of them. The mind boggles.
So we took the bus back to Cancun , stayed in a nice homestay almost next door to the original one we wanted to stay at and went to the airport the next morning early. What fate would greet us this time?