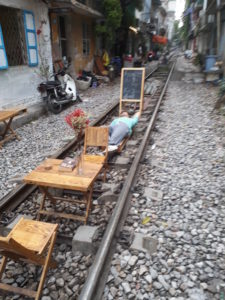 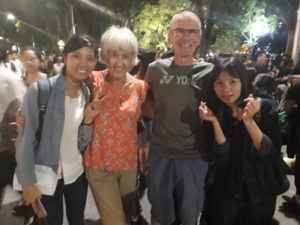 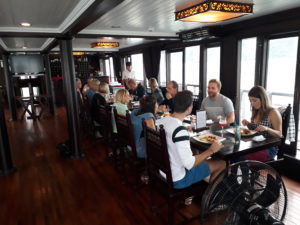 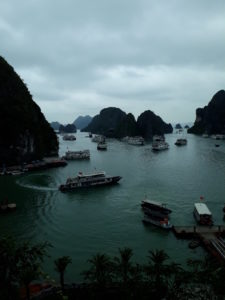 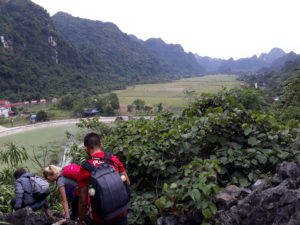 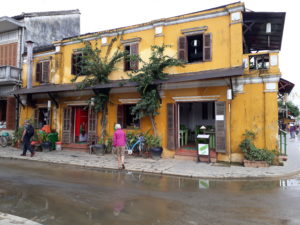 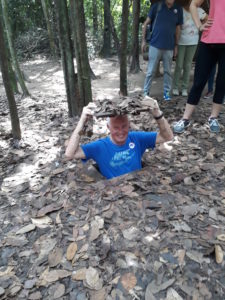 On our first day in Hanoi I had to sort out some banking problems. The place is frantic, with thousands of motor bikes keeping up an incessant roar. Myanmar was bad but this currency drove me crazy. 1 Rand =1600 dong, 1 US $ = 23000 dong. One draws 10 million dongs from an ATM which is equivalent to $43. We went to the Hanoi Hilton , a prison museum where political prisoners were kept by the French and the Vietnamese kept American air force pilots prisoner including Senator John McCain. Ho Chi Minh mausoleum was closed when we visited as was the War Museum for lunch but we managed to sneak around and look at the shot down aeroplanes and bombs. In the evening the area around the lake was turned into a traffic free zone and the people came out in droves to make the most of it. There was dancing , singing, children’s games, skipping and a nice festival atmosphere.
We went to the Ho Chi Minh mausoleum but it was closed,and then on to the war museum which was also closed for lunch but we managed to get round to see the US shot down planes. In the evening the area around the lake was turned into a traffic free zone and the people came out in their thousands. There was dancing , singing, children’s’ games, skipping and a nice festive atmosphere.
We transferred by bus to Halong Bay for a two night cruise. This is a luxury cruise ship with cabins and good food. But the number of boats and the mass of people is quite off putting. We stopped at a beach and climbed up to a view point but the whole thing was a farce with hundreds of Chinese jostling, shouting and taking selfies.
Woke up next morning to a wild scene ,rain and mist but this seemed somehow to enhance the beauty. Halong Bay is a range of karst limestone mountains rising sheer out of the sea in spectacular fashion. We sailed to a floating fishing village, people living on floating platforms and boats in not much more than subsistence level. We then moved on to a cave. I wonder if there are any unspoiled places in the world to visit which haven’t been ruined by tourism. The number of cruise boats and the frantic building of hotels is frightening.. How will this area cope environmentally in the future.
We transferred to Cat Ba Island by speed boat and did some hiking in the area. We met travellers a bunch of travellers of all ages and nationalities. Cac Bar is a nice place, cheap with good food. There is a rash of developments of hotels, most of them seem to be tall, narrow buildings, like China and others they have no sense of aesthetics unlike the Japanese. But where will all the tourists come from, what experiences are they after?
Our hike across the island was tough, up and down rock faces and Carol took strain and a couple of falls and ended up on the back of a scooter.
Time was up for Cac Bar and we made our way back to Hanoi by bus , ferry and another bus. By now the weather was cold and we hadn’t packed warm clothing so keeping warm became a priority.
I enjoy the Vietnamese people much more than the Burmese. They are open , friendly and happy. How resourceful they are after all their woes. Again we heard the refrain of Government control and corruption. It doesn’t matter what system there is it’s the same story.
Travellers never cease to amaze me, to the Polish couple hitch hiking around South East Asia, to the Americans who grabbed a week off to come to Vietnam when they found a really good flight offer.
I would nt like to drive in Vietnam. On the highway they overtake on the inside or outside nd cruise on the outside. In the city it’s chaos, the motor bikes just do what they want, take to the pavements, run red lights , go down the wrong way down the street.
Hou An is a small town midway down the country with quant and historic houses, but its become a tourist haven with the usual mixture of hotels, restaurants , travel agents , coffee houses and anything connected with taking a dollar off the tourist. Nevertheless we enjoyed the experience cycling into town and later taking a tripdown the coconut plantation in a coracle and mixing with the locxals.In pouring rain we went to the market and bought ingredients and cooked spring rolls and fish. We stayed at a home stay, a very pleasant experience with friendly accommodating hosts, it gave us the opportunity to talk to them and find out some of the challenges of living in Vietnam and its history. Ho Chi Minh City ( Saigon ) is a busy city with horrendous traffic and lots to see and do. Its famously full of scooters and motor bikes and they think nothing of taking to the pavements en masse. Crossing the road is a challenge and needs a cool head and nerves of steel. We bumped into the first South Africans we had seen after 3 months We visited the Reunification Palace, the old Presidential Palace, complete with sumptuous furnishings , banqueting halls, bedrooms, and underground bunkers.
We’ve spent time in prisons ,museums ,Vietcong tunnels and seen horrific images of the war. War is senseless, barbaric and affects the innocent and the politicians who instigate it all get away Scott free.