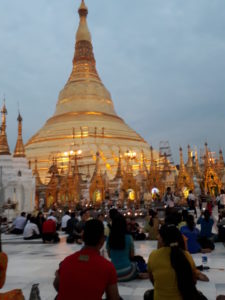 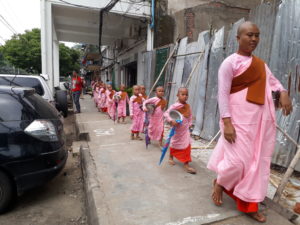 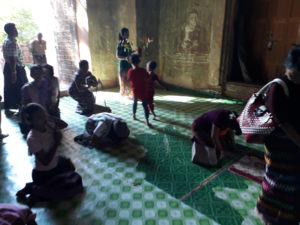 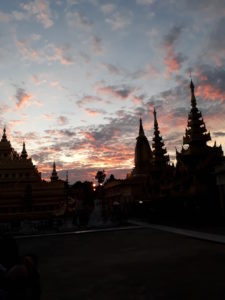 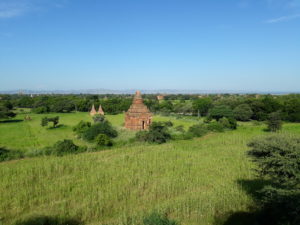 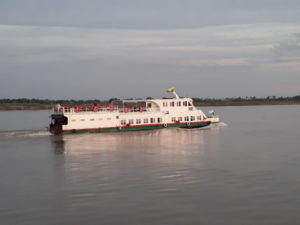 We transferred to Myanmar by Air Asia via Bangkok . People watching in the airport was entertaining. There was a group of 50 women who must be on the ugly, noisy women’s day out. Also I was fascinated by how locals can sit cross legged for hours . The joys of budget airlines, jammed into a seat designed for a Japanese dwarf, paying more for a bag than the actual ticket itself , surly flight attendants and paying for a blanket .I’m sure that Charles and Camilla don’t have to put up with these indignities. But there’s no doubt budget airlines have changed the face of flying forever, now middle class Asians including the Chinese are able to fly at will.
Our first impressions of Yangon were that it is more sophisticated than we expected, the cars are all right hand drive but they drive on the right, men and women wear sarongs, women wear ochre on their faces, there are lots of run down beautiful colonial buildings, barefoot monks walking the streets, people eating at street cafes, poor living quarters but a vibrant community where anything is available.
In the evening we visited the Shwedagon Pagoda which is an enormous complex with a central gold leafed dome. As the evening drew on the pagoda glowed from the lights and we squatted with the crowd and took it all in. It was quite a moving experience, people buy flowers and offer them and pray . It seems to me that this is a common theme for all religions to remain humble.
We had dinner on 19th street , a noisy active crowded area but well organised and delicious food.. Yangon is a kaleidoscope of people , smells ,colour ,people selling everything, men using old typewriters, crowded internet cafes . But everything is run down, the pavements are a nightmare to traverse with holes , open drains , polluted rivers ,litter and everything is run down including the railway station and the trains.
We took a 10hour leisurely bus ride to Bagan through lush countryside. This town has become a tourist haven and is the usual mixture of souvenir shops, hotels, restaurants, scooter and bike hire, travel agents , convenience stores with no prices and with a taste of rip off and greed., but its brought much needed income to the country.
We took a tour with a horse and cart at a slow clip clop pace and visited 5 temples but by lunch time we were wilting in the heat. This is on the lines of Ankor Wat with hundreds of temples scattered around the countryside. The next day we hired bicycles and rode around following a map and visited the more remote temples a bit off the beaten track. This was really nice as often we were the only guys on the road.. Many of the temples have frescoes and an inner four sided corridor with a Buddha on each side. Most date from the 12th century. We climbed up the steep steps of a temple and perched precariously on a ledge with a good view around. Climbing down was quite scary, I went down backwards, like descending a ladder.
We took the ferry from Began to Mandalay, a 10 hour trip along the Irrawaddy River. We saw dawn break , hot air balloons flying over Began and had breakfast and lunch on deck and passed through a lovely approach to Mandalay with temples on the hills.
Mandalay has little to commend it, roaring traffic and pollution, thoroughly dangerous pavements and people who see you as a money target, . We walked a long way to Mandalay Palace, paid a lot of money for a run down ,unkempt shabby palace in the middle of an army camp. The city redeemed itself a little after we visited three more temples .The following day we hired a taxi for half a dayand visited more temples, went up Mandalay hill and a gold leaf plant before tottering along the pavements home. This is the least attractive city we have visited.