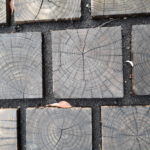 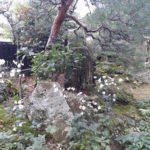 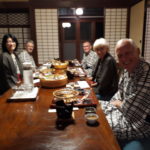 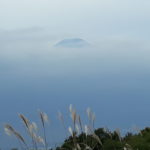 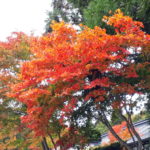 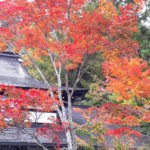 We made one train journey of 700 kms at an average speed of 200 kms /hour including stops and a train change. In Kyoto , which was particularly confusing because where we lived there were 3 lines and stations which criss crossed each other resulting in us catching the wrong train, whistling past our station on an express and trying to use my hotel pass card and getting it jammed. This is all part of the joys of train travel in Japan.

We moved to Nagano in the Japanese highlands, where the winter Olympics were held in 1998 and what a difference in the temperature, down to 13C. The first day we went by bus to Togakushi with the intention of walking but changed our minds as it started raining and got colder and colder. So we walked around the shrine and took photos of the fall colours before beating a hasty retreat down the hill.

We have enjoyed Japanese food and it is by no means all sushi. The variety and quality is enormous. Like sake there is so much on offer. We also loved the drink dispensing machines everywhere; they all work and they all give you the correct change.

Another cold and rainy day in Nagano so we stayed local and visited the local Zenkoji Temple , another large wooden temple and nice old area with specialist shops all around.
Nagano is a pleasant city, not too big, less people and lots of places to walk and in winter ski.
We went on a day trip to Obuse , a small town 30 minutes away . We just walked around a pleasant village with fruit, nuts and crafts in abundance. It’s a tradition in Japan to buy someone a gift, usually some food speciality from the region, all beautifully wrapped and presented.

Some things puzzle us about japan, there are no litter bins but there is no litter. People just take their litter home. Heated toilets are nice, even in public loos. The Japanese have this wonderful ability to make art out of gardens , furniture, and rooms. The road crossing lights all work and people religiously abide by the rules and the people take such a pride in their work and appearance. The bus driver wears his uniform with a white shirt and tie, the shop girls are all turned out spotlessly. We loved the bakeries; we never expected such beautiful, bread, cakes and confectionary.

There’s no aggression, only modesty and courtesy.

The railway stations are abuzz with cafes, shops, stores, tourist information and helpful ladies.
We met up with Rob and Yumi , Patrick’s cousin and wife ,and made an overnight stay in Hakone near Mount Fuji, we just a caught a glimpse through the clouds. The hotel was a traditional Japanese one with an onsen, a communal bath in a hot spring where you must follow a strict code of behaviour and etiquette. This was followed by a traditional meal, 7 courses , all beautifully presented and explained by the waiter. We then slept on a futon on the floor, followed by another onsen in the morning and a further traditional Japanese breakfast.
By now it was raining cats and dogs and we holed up in Tokyo for 3 days as a typhoon approached and then struck. It was a bit of an anti climax , just lots of rain and some wind one night.

Rob told us some interesting facts about Japan. With the state of their economy there is a continual housing recession for the last 15 years and houses are still worth less than now. The Japanese corporate world is alive and well, long hours ,and beery dinners with bosses. 34 million people live in the Tokyo, Yokohama conurbation. There are a lot of single people; they work long hours and are not socially set up to find partners. Rob earns Y2000 for one 45 minute lesson ,the students pays Y8000 .
Their flat costs Y150000 per month , furnished with 2 bedrooms.
Thanks to them and their family for entertaining us and making our stay in Japan so memorable. One last train trip to Osaka to catch our flight back to Kuala Lumpa and our Japanese venture is over.

Great memories from a great country.