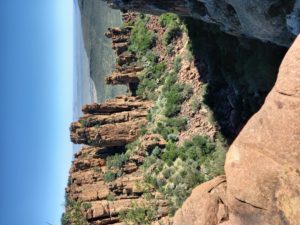 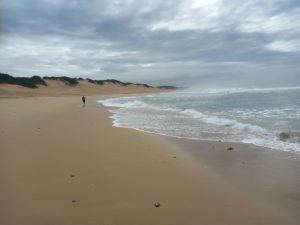 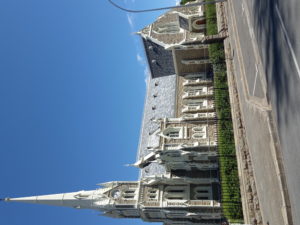 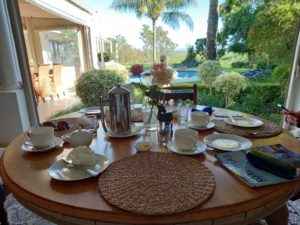 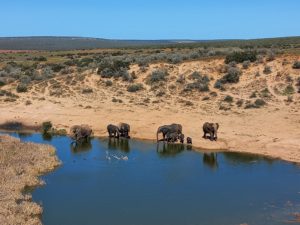 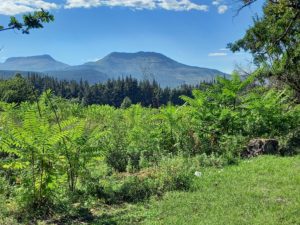 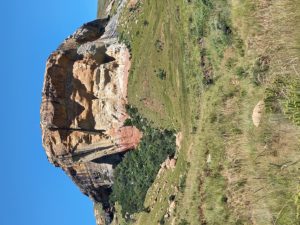 After 12 months of frustration caused by being unable to travel due to a combination of recovering from medical procedures and corona virus lockdown restrictions, I decided to make a road trip through the South African countryside.

I started with a four-hour drive to Clarens in the Free State through wide open countryside on the N3 which is the major highway from Durban to Johannesburg. There are a huge number of trucks mostly transporting goods to and from the docks in Durban and I always wonder why their loads are not put on the railways. Not to mention the huge number of speed cameras on the road together with clusters of traffic policemen. Clarens is a small town in the foothills of the Drakensberg and has become a haven for arts and crafts.

I hiked the Golden Gate National Park the next day which has a number of sandstone mountains with strange mushroom shapes. I hiked to the top of Brandweg Butress which involved an ascent and descent using a chain; this found out my painful knees and jittery head for heights. I carried on to Echo Ravine, very apt as it was full of a troupe of baboons barking at me in the echoing chamber. They were very curious and followed me into the cave, they even pushed rocks down at me. I have to say they made me a little nervous particularly as the males are big with enormous teeth.

The park centre was disappointing, full of staff and few guests, noisy with grass cutting and the building of a dinosaur interpretive centre. I made a drive to the vulture restaurant but unfortunately there were no vultures but a splendid view of the Drakensberg range.

My next drive was much longer, through the Free State where it seems that one can see forever, huge 360 vistas, and into the Eastern cape. All went well until the last 50 kms. Despite having two GPS systems and a road map I ended up on the wrong road and had to retrace my route until I came to the correct route which was a horrendous gravel road. I had visions of breaking down, punctures or worse but after a total ten-hour journey arrived at Hogsback. Travel is challenging, takes you out of your comfort zone with its daily routines and gives you actual experiences instead of those watched on TV.

Hogsback is a bit of a poor man’s Clarens, a dusty pot holed main street with a few pubs and shops. However, it does have wonderful forest walks with 100-year-old enormous redwood trees.

I have stayed in both cases at Backpackers, a budget way of doing things, which allows me to self-cater and save money for future travelling. Sometimes things are a bit rough and ready but with just myself to cater for, who cares. The Backpackers at Clarens was built and maintained as that whilst in Hogsback it’s a wing of a rather struggling hotel from past glory days.

During these days I spent time in my room alone reading, no TV or other entertainment. Over the weekend the hotel was full of African people, numbers of whom were sharing rooms and partying outside. Noisy but well behaved.

I then drove 120 kms to Port Alfred. Driving through country towns is often a depressing sight in South Africa. The old apartheid system was to have a town centre and separate suburbs for whites and blacks. Nothing much has changed except that under the ANC the town centres have deteriorated into nothing much more than a bazaar with street traders, pot holed dusty streets and crowds of people standing haphazardly outside the Post Office waiting for the possibility of their R300 Covid benefit. The townships haven’t changed except they have got bigger; bleak, windswept clusters of tiny houses or worse tin homemade shacks.

I stayed a week with friends at a guest house in Port Alfred. We did a number of walks, one of which was 13kms along the beach to Riet River. At low tide the sand is firm, flanked by high sand dunes and the only thing we saw was flocks of cormorants, oyster catchers and terns. We also travelled to Kenton on Sea and walked to the Diaz monument where Benjamin Diaz planted a cross; the first European to sail around the Cape and set foot in South Africa.

Bathurst is another small village from 1820 settler days with lots of art galleries and antique shops selling all sorts of bric a brac from past days including 78 and 45 vinyl records dating from the days of my youth. Pubs aplenty like all the other artistic centres and lots of older grey bearded retirees and wives wearing peasant type long flowered skirts and general 70’s hippy era living in traditional houses with tin roofs and wrap around verandahs.

South Africa is the land of load shedding, a euphemism for power cuts caused by incompetence and gross corruption of Eskom and the ANC Government. On top of it all there is a severe water shortage in the area due to drought and it’s not uncommon to see people filling up water containers from a municipal bowser at the side of the road. It’s becoming more and more common for householders to endeavor to come off grid partly or fully by the use of solar panels and battery inverters and water tanks to collect rain water from roofs.

Accompanied by Patrick and Carol we started a road trip back to Durban by first driving to Addo Elephant Park where we saw countless elephant, kudu, red hartebeest and springbok in a beautiful well managed park. We drove to an area near Colchester which is a citrus fruit growing area and stayed in a thatched cottage next to a river. The area is pristine, well maintained farms and cooperative factories in stark contrast to other run-down country areas.   We had breakfast in the original farm house in a beautiful dining room overlooking the pool and views over the orchards.

Onwards to Graaff Reinet, an old well-kept town in the Karoo with its beautiful Dutch reformed church and well-kept Cape houses and interesting shops and cafes. But again, it strikes one the demarcation between the white and coloured areas, the latter are out of town and really on the wrong side of the tracks. We drove up to the Valley of Desolation, a view site high up in the hills. The sense of space is enormous here. You drive first through lush orchards and then into stony hills with vast vistas. The route goes straight through the countryside like an arrow and on these side roads there is almost no other traffic.

We arrived at our next stop, a farm near Cradock after another 50kms on a gravel road. This farm belongs to the Collett family since the 1820 settler days. There is a book tracing the family history to the present day and Anne a descendant is one of the owners. They farm sheep, nuts and grasses. The area is irrigated from a water project carrying rivers and canals many kilometers to the area built over 20 years ago. They have problems with organized stock theft. At the moment there are not so many tourists during the week so we were able to have the farmhouse to ourselves.

Mountain Zebra National Park is well worth a visit. Designed to protect the mountain zebra it has a variety of habitats including high pasture. We saw black wildebeest, gemsbok, as well as the zebra but didn’t see lion or cheetah. Hats off to National Parks Board on a well-kept and organized park.

Cradock is a ruined, pot holed slum whilst Graaf Reinet is a pristine little town. Cradock is dominated by trucks delivering manganese to PE, another ill-considered Government project.

Our last two drives were through the Eastern Cape with a night stop in Matatiele, a featureless town , in pouring rain and mist into Kwa Zulu Natal. The previous day there had been a demonstration on the road, a common feature in today’s South Africa. Often nobody knows what causes it but it’s mainly poor service delivery by the local municipality. We saw the result, rocks, broken glass, burnt roads from tyres and fallen trees blocking the road. We were lucky that we hadn’t driven the road a day earlier.

The trip allowed me to see parts of the country that I hadn’t seen before. South Africa is a beautiful country but a blighted one. Sprawling ugly townships towns, villages with terrible pot holed roads and people who have nothing to do except wait at post offices to collect their benefits. In contrast there are beautiful well-run farms on pristine land, well run and organized. The contrast is huge and doesn’t bode well for the future.