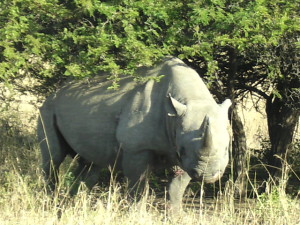 Phinda has a number of black rhinos as part of a WWF / KZN Wildlife range expansion project on the understanding that they are monitored visually on a daily basis.

Simon, my son, arranged for me to go on a walk with Zamu and Sipho; the two rangers dedicated full time to this job. Dedicated is the word; two small wiry guys who look as though they could walk all day and probably do. I’ve been out with them previously and then they were armed solely with knobkerries – a Zulu stick with a knob on the end.

I asked them if they had ever been charged and if so what did they do? They smiled and said “Often and we throw the knobkerrie or our cap at the rhino” Can you imagine throwing a stick at 1 ton of charging, snorting, enraged beast coming straight at you?

One elderly female called Gogos will always charge you they tell you fondly with a smile. They have one old male they told me that is hovering between life and death after one too many fights and the vet can do nothing for him. Even though they realise this is the normal order of things Zamu says he somehow feels personally responsible as the animal is under his charge.

The black rhino is a seriously endangered species, smaller, more nervous and aggressive than the white rhino. The white rhino grazes in grassland and open woodland whilst the black rhino is a browser and likes to feed on twigs and branches in dense bush , hence they are more difficult to view and more dangerous to get close to on foot.

This time they had rifles and we started walking at 06.00 ona perfect cloudless day. I made a mental note to tell Paul for future reference where I keep my will if/when I returned. Walking in the bush is a great experience because all the senses are brought into play and not just sight. One also has time to appreciate the smaller things in the bush, butterflies, different bird songs, overpowering smells and animal calls.

On the walk we saw recent leopard and lion spoor and disturbed wildebeest, impala, kudu and giraffe and heard elephant trumpeting close by. In one heart stopping moment an nyala bull exploded out of a bush next to me. We picked up fresh black rhino tracks which after awhile the guys said were from a male patrolling his territory.

Picking our way through thick bush we were suddenly confronted with two huge rhinos with massive horns; they swivelled quickly and crashed through the trees away from us. The guys said they were white rhinos; I personally just had time to identify them as rhinos before they made off.

After the heart had slowed down we continued to track the animal, it’s astonishing how much the guys see from a broken branch, a footprint, grass with smelly urine on it, warm dung and where he had drunk. There’s no talking, communication only by signs and clicks, single file walking and strict instructions not to run whatever comes at you.

Another heart stopping moment, the guys had spotted a male buffalo ahead. We quickly hid behind a rock and wondered if he had seen us and would search us out; the hunter being hunted and then we heard the sound of heavy hooves galloping through the bush as he made off.

We lost our rhino’s prints for a while in thick grass and we then made our way into a dense area of bush and searched some more. Twice the guys shinned up trees to scan but with negative results. They were worried that it was too dangerous to continue as the bush was thick and there was nowhere to go if we came across a rhino.

We had mentally come to the conclusion that we would have to withdraw without seeing our animal when suddenly there was a rhino just 10 metres ahead of us. I could see his ears swivelling right and left to locate the noise; rhinos have poor sight but make up for it with acute hearing and smell. Then he was up and charging away to the left of us.

Mission accomplished, the guys said this was a different, smaller male than the one we were tracking .Each rhino has a set of notches in his ear for identification but the guys don’t need that as they know each rhino personally. Once back home they log each sighting with GPS coordinates. So we started to make our way home and then suddenly we were on top of a black rhino mother and calf. Zamu whispered “out, out “. I didn’t need much urging and started to back off keeping them in sight.

We rounded a bush and stopped to watch them. The wind was swirling about and the mother must have caught our scent; she was agitated and did a 360 turn looking for us. Zamu said “out, out “again and we backed off quickly and left them in peace.

Back home later I saw Zamu and he said they were going out again later in theafternoon. For them it was just another day at the office.