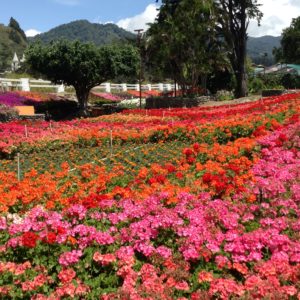 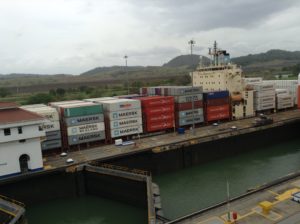 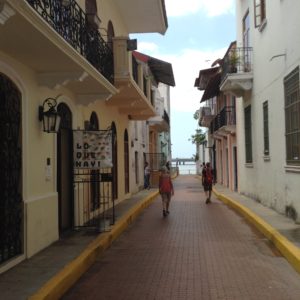 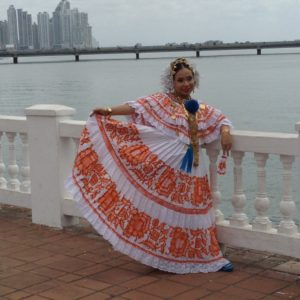 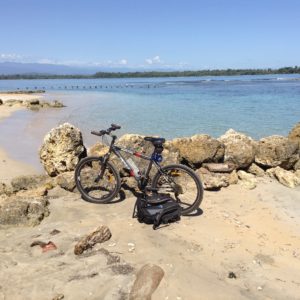 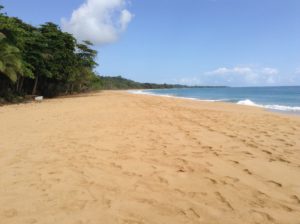 We had the usual one and a half hours wait for the bus but the journey itself was pretty seamless . Crossing the border to Panama was quite entertaining , first pay exit tax , get passport stamped , walk across the border to Panama , the usual rigmarole with photo, finger prints, then form fill for customs, bag inspection and back on the bus . we changed to bus at Boquete and arrived in the evening. The first of a number of signs that it is different to Costa Rica, cooler, different vegetation, less jungle and there are a lot of Indian looking people. . Two kind elderly Americans took us in their car to the estate where they live in  an upmarket gated  estate with a golf course ,restaurant and library , all surrounded by nature. We went to the local Farmers Market , it was more like a retired Americans meeting place.

We went on a guided walk to a waterfall through a delightful forest with good bird sightings including the beautiful Quetzal.. We watched howler monkeys making a huge noise and swinging acrobatically through the trees. The forest here is steep and high , a wonderful kaleidoscope of greens, ivy, creepers ,ferns , orchids; an abundance of living.

A lot of Americans move here because of the lower cost of living and maybe the better climate.. But they have the look of expatriates everywhere, not quite fitting in .

The world as I know it is fast disappearing . Since 1950 , just after I was born, the world’s population has tripled and continues to grow … We are faced with the extinction of species at an alarming rate, not just rhinos but the smaller less famous ones. I didn’t realise it at the time but the scarlet macaws I saw in Jiminez form part of only a thousand birds left in Costa Rica. Tons of plastic pollutes the oceans. Coral reefs are destroyed by global warming together with the melting of the polar ice caps ..Our ruination of the planet bodes ill for the future.

The bus journey to Panama City went well, firstly the local bus to Boquete to David and then a fast change to the big well appointed bus to Panama which took 6 hours. The bus station there was the biggest I’ve ever seen .

Panama City is a modern bustling city with lots of traffic problems. We went to the ship canal and viewed the locks and ships going through and the fascinating museum..

We spent time walking through the old town , quiet pedestrian streets with well renovated houses and buildings. Havana should look like this. .I met Sarah from Nice France who had travelled alone for three months and was very proud of herself.

I travelled by bus overnight to Boca Island. Firstly they didn’t want to let me on the bus because my name didn’t tally with the driver’s sheet and the lady insisted I buy a travel card even though I had a ticket. I waited until the bus was about to pull out and then jumped on board and insisted they find me a seat, which they duly did with much eyeball rolling. Sometimes you’ve got to pull weight.. It was a lousy journey , freezing cold, cramped, uncomfortable. We arrived at the ferry at 3.30 am after a 9hour journey and had to wait until 6.30 am for the first ferry to arrive.

The island is a delight, very laid back, wooden clapboard houses, some very dilapidated and many built on stilts over the water. It has a very Caribbean atmosphere , English with the regional patios, West Indian looking people with that lazy slow way of talking and attitude to go with it.

The casa I stayed at was one of the best , owned and run by Felicitas who is highly organised. I spent my time reading , writing and cycling around the island to a number of stunning beaches, white sand, calm turquoise waters., tracks alongside the sea through coconut plantations. I had some of the most memorable bicycle rides of my life and always there was a café at the water’s edge for breakfast.

I went on an all day boat ride to Zapatilla Island which had a dilapidated wooden walkway through a swamp which at times was positively dangerous. Did some rather mediocre snorkelling and then went full pelt across the ocean in an ever increasing rain storm and arrived totally soaked and shivering at the jetty.

I was told that the major families in Panama cream off much of the Panama riches. On the island there were many instances of poverty.  Many of the poor don’t want to work . There, s a big hash culture , I was offered Ganja a couple of times and many of the visitors looked like regular imbibers.. There’s an ex pat community here too but its not for me. Too hot and sultry and quite frankly boring unless you are strongly into water sports , fishing or running a tourist business.

This time I took the plane back to Panama City. The airport was a 10 minute walk from the casa , the Air Panama plane was like the Coconut airways song except I sang, ” Hey I,m going to Panama City, across the Caribbean Sea . ”

The 1 hour flight was a pleasure after the bus ride.

In Panama City I met a grizzled 83 year old Jamaican/ American who told me I looked like a Gringo. He then told me that a Gringo is a fucking American.