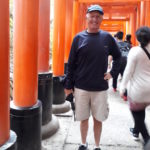 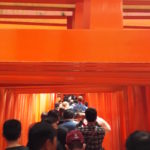 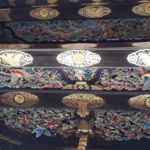 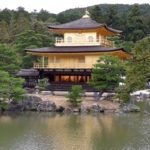 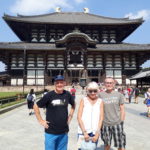 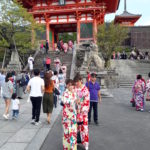 I find the Japanese people very helpful, reserved, exceedingly polite , well organized ,modest, hard working and very environmentally conscious. Carol left her phone on the train and someone handed it in to the lost property office. On the tram a couple offered to pay the fare as we struggled to find change.

We moved to Saga , a small town close to the centres that we wanted to visit. We went by train to Nagasaki and the Peace Museum where the second atomic bomb had been dropped. More of the same as Hiroshima , harrowing photos and relics in the museum.
Fukuoka is an attractive fun loving town and we spent time sampling some of their food from stalls as well as an open top bus ride.

When travelling around Japan the scenery is much of a muchness , heavily built up between the green hills.
We travelled from Saga to Kyoto, we only had a few minutes to catch our connection and the place was packed with people scrambling on to the escalator. Patrick said “ We’ve got one minute “ and we arrived on the platform as the train doors closed , the guard blew his whistle and my last memory is the guard hanging out the window as the train passed by already doing 80 kms / hour. No problem , there was another one 15 minutes later.

We stayed at an Airbnb in Kyoto owned by a friendly American Barry who also runs a café and an English school. On our first day we visited 3 temples , Sanjusangen do, which had 1000 gilded statues of Buddhist ladies, Chisshaku Temple with beautiful gardens and rooms and finally Kiyomi Dera temple , a spectacular temple on a hill. This was very crowded, and lots of ladies and some gents wore kimonos and traditional dress.

Although the Japanese are world leaders in the manufacture of cars I guess many people don’t own one because it’s expensive , crowded, and congested on the streets. Many of the cars are small box like models that you rarely see in South Africa.
We took a day trip to Nara , a really nice place but very tourist orientated. The main temples and shrines are situated in a park with tame deer wandering about. We walked from the station to the Todajii temple , the biggest wooden building in the world and overwhelms you with its size. Inside is a massive bronze statue of the Buddah.

We walked through the forest to Kasuga Taisha shrine with rows of lanterns and then back to town to the station.
The train lines around Kyoto are very confusing and criss cross each other . A number of times we found ourselves on the wrong train or whistling past our station on an express. We didn’t know that a Limited Express stops less than an express. We have a JR rail pass but there are many private lines where this cannot be used. On one of our journeys on the Shinkasen we did 700kms at an average speed of 200 kms /hour including stops and changing trains. That’s like going from Durban to Johannesburg in 3 hours.
The Golden Temple is just that, a beautiful house covered in gold leaf next to a lake and beautiful gardens but the experience was ruined by hordes of people and school parties. Previously we visited Nijo Jo castle, a family Shogun estate.

Kyoto and other cities are well equipped to deal with foreign tourists , at the station there is a tourist information centre and with their help we took the public bus around the city.
With the decrease in population there are many apartments for rent, but many of them are tiny and crammed in together. It’s difficult for foreigners to work in Japan except as English teachers.

On our last day in Kyoto it was much cooler and a little rainy ; we visited Fushimi Inari Taisha. We climbed up a hill 4 kms to the top through 10000 orange gates and past a number of shrines.
We saw amazing sights in Kyoto and Nara which I will never forget.