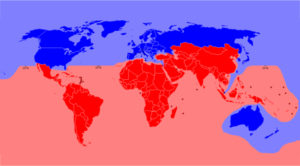 Every day 3 million passengers use the tube system in London. This is part of an integrated public transport network of rail, bus, tram, light overhead rail and tube. A passenger purchases an Oyster card which is swiped on entry and exit to the station or bus and which can be topped up at automatic telling stations or directly from a credit card. No cash, no fuss, no bother. It’s not all sweetness and light though with the main problems being overcrowding at rush hours. London Transport continues to invest in new lines, systems, and trains and buses. Switzerland and Germany have, if anything, an even better and more efficient service and France has a wonderful network of high speed trains. Living in these countries it’s not necessary to own a car.

Compare this with South Africa where public transport has been handed over to the minibus taxi industry which has an increasing lobby with the Government and disputes any move to improve public transport with intimidation and violence. Drive by shooting a la Al Capone is common amongst warring factions. Apart from the Gautrain, which is a limited, elitist new railway serving the more affluent areas of Johannesburg and Pretoria the rail network has been allowed to deteriorate and is dangerous to travel on due to crime. So more and more cars and taxis are pouring on to the already traffic clogged roads. The rail network is all there, it just needs vision and investment to update and bring it into the 21st century.

The grid locked cities of the Philippines are worse. Most people’s mode of transport is being jammed onto a motorised tricycle or a jeepney, which is a modified American Jeep pick up with bench seats. Sitting in one of these means being shoved next to your neighbours, stifled in the heat and high humidity, choked by diesel fumes and sitting for hours in the continuous stopping and starting of the traffic. One Sunday it took us 2 hours to drive 8 kms to a friend’s house in Cebu City.

Kathmandu is a also a city where driving on the roads is a nightmare with many old , beat up cars, trucks and buses belching out black smoke on pot holed narrow, inadequate streets. Travelling the 200kms from Kathmandu to Pokara by bus took 8 hours and was a slow, bumpy journey on narrow roads filled with Tata trucks which frequently broke down and blocked the road whilst major repairs were carried out. The only alternative is by small plane which is more dangerous with frequent crashes in the mountains.
People quite simply earn less in the 3rd world.

I talked to the hotel receptionist in Vientienne , Laos and she told me she earns US $50/month for working 12 hours/day , 7 days per week .

The 1st world has 16% of the population and enjoys 78% of the world’s GNP. Working conditions are often poor; clothing manufacturers often turn a blind eye to the sweat shops that produce their high value branded products sold in the West at high cost. Rates of unemployment are higher in the 3rd world but it’s interesting to see that in South East Asia the population are very innovative in setting up stalls on the street selling anything from cooked food to carrying out scooter repairs. They don’t sit around and bemoan their fate like in South Africa. And there’s no welfare state in the 3rd world, no cradle to grave system to pick up the bills when things get tough. Switzerland recently held a referendum where the proposal was the Government would pay each adult SFr 2000 /month and each child SFr 600/month in view of increasing unemployment due to robots taking over jobs. The Swiss people actually voted against it. Can you imagine that in South Africa?

Where are all these jobs going to come from that Governments talk about with their job creation promises? Every company is intent on increasing productivity, reducing head count and automation.
Japan has the highest life expectancy in the world at 84 whilst South Africa is 60 and the worst is Sierra Leone at 46. Looking at the charts 1st world countries have a far higher life expectancy than 3rd world countries. Diet, exercise, superior medical conditions all contribute to this and 3rd world countries have to deal with wars, HIV Aids, chronic diseases such as malaria, malnutrition and inadequate medical systems. As a continent Africa suffers from the lowest life expectancy in the World.

Population continues to grow at a higher rate in 3rd world countries than 1st world countries; in fact in countries such as Japan and Italy the population is declining. Better education, women pursuing careers and a focus on life style means that couples make a conscious decision to limit the size of their families. Although with younger families In South Africa family size would seem to have decreased its very common for grandmothers to raise children whilst single mothers have to be the bread winners. In the Philippines the population continues to grow thanks mainly to the Roman Catholic Church’s policy on birth control. But this does mean that grandparents have a role to play and a place in the family. They are looked after in old age and not just shoved into old age homes when they become infirm.

The route to a prosperous and thriving country is through educating the population ; South Korea achieved its aim of becoming a 1st world country by education, discipline and hard work. Currently South Africa is in the middle of an” education transformation” which in effect means dumbing it down. Students would like to have a free education consisting of turning up at the end of three years and receiving their degrees without attending lectures or taking exams. And in the meantime the schools frequently have 70 students per class and being taught in bare concreted schools with broken windows and zero facilities.

1st world countries have established democracies with independent judiciaries and strong policing. 3rd world countries have weak financial systems and the rule of law and governments are highly corrupt and nepotism and cronyism rule the roost. Any Government position, even a minor one, is highly desirable because it gives the incumbent access to the honey pot.

Nothing gets done in service delivery because there’s no money left over after the increasing army of Government employees have creamed it all off. Witness the sad slide of South Africa since Zuma took over as President and the abject poverty of Mugabe’s Zimbabwe.

In the World Happiness Index 2016 it’s no coincidence that Denmark was 1st followed by Switzerland and Iceland. The ratings were based on GDP per capita ,social support ,life expectancy, freedom to make life choices, and perceptions of corruption.

It’s a sad world we live in. 80% of the world’s population live in poor housing, 50% don’t have enough food, 24% don’t have electricity, 17% don’t know how to read, only 7% have access to the internet and only 1% have a college education. Meanwhile the rich get richer and the poor get poorer.