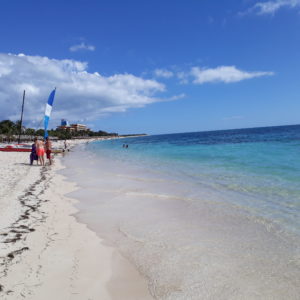 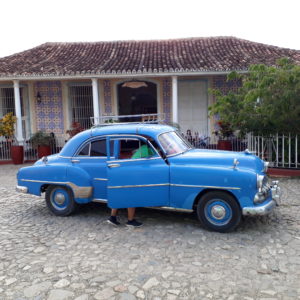 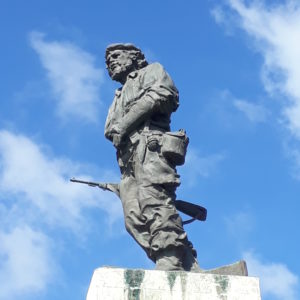 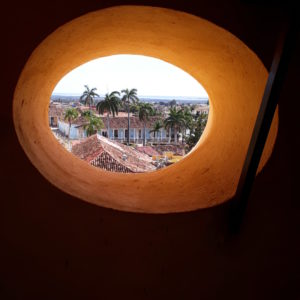 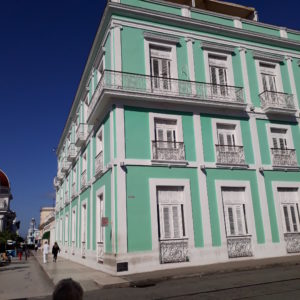 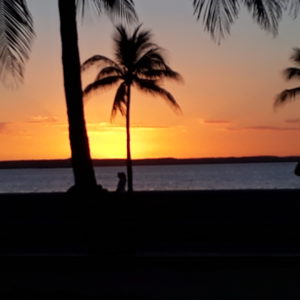 We went by bus to Vinales. The system was queue and buy a ticket , wait in a scruffy waiting room , then 30 minutes before the bus leaves queue again and get a seat number , which bears no resemblance to the seat numbers on the bus and is free seating anyway. The buses were dusty and dirty and the seat in front reclined so far back that I had a French girl’s head in my lap. And these are the good buses for foreigners. During the trip I started to feel ill and by the time we reached Vinales I had a temperature. For the next 24 hours I was never off the toilet. By the time I recovered Patrick went down with the same thing. The area has carst limestone cliffs like in Vietnam , Thailand, China and tobacco is grown. The town has brightly coloured wooden houses and seems to be very geared to tourism, every other house is a homestay. The one we stayed at was run by a big homely smiling lady with a fat , lazy husband and son. It’s clear the women do the work in this place.

To get to our next destination , Cienfuegos we had to first catch the bus back to Havana and change there. On the road we stopped off at a roadside café, there was almost nothing to buy there. In Havana bus station they charge you 50 cents to use the disgusting toilet; Patrick took a photo and afterwards a burly man told him to delete it. Instead of sitting around why can’t the employees clean and repair the toilets and wash and vacuum the buses? Because it’s a state run service, there’s no competition and the employees are poorly paid. We travelled along the Bay of Pigs to Cienfuegos.

It’s a pleasant town with muted , pastel coloured buildings built around a classic Spanish square .In the homestay we watched the Gisella’s little brother catch doves on the deck with an improvised string trap . We only found out later that the men around , who were keeping doves , do so as a business to supply them to a religious sect Santeria.

We enjoyed staying in the Homestays and got on well with our hosts. Giselle , our host told us that she had a diploma in Tourism and then was put to work cleaning floors with one day off per week earning $10 /month. There are many men sitting around all day looking sad and disillusioned , we were told later that there are plenty of jobs available but nobody wants to work for the poor wages .

Books like Lonely Planet don’t paint a true picture of a country. Behind a crumbling beautiful façade can live a life of poverty and misery and they don’t portray that.

We moved to Trinidad, a cobbled, attractive town full of tourists. It’s hard to find anywhere today in the world without tourists. We spent the day at Playa Ancon beach, the typical Caribbean blue sea, white sand, Europeans sizzling on the beach. There are many girls travelling from different countries, some in pairs and some singly. They seem to be more adventurous than guys.

We took a walk to the top of a hill and visited another mundane museum celebrating the 60 year old revolution.

The scene at the bus station in the early morning was almost cliché South America. People milling about waiting for buses and then chaos erupting when an official opened a window, everyone clamouring for a tickets. We drove along the mainly empty road, passing gauchos on horseback, bullocks or horses pulling carts full of people, guys on bikes or the odd lone vintage American car.

There just don’t seem to be any stores or shops as we know them in Cuba and everything is in short supply except for beer, rum and spirits , which are plentiful. Our homestay in Santa Clara was very beautiful, like an oasis in the desert , with a peaceful garden where we could eat our meals. This town is the site of Che Guevara’s mausoleum which we walked to on the top of a commanding hill and with a fine statue of the hero. Once again the mausoleum was closed (remember Ho Chi Minh ) and we wondered if he would have been proud of today’s Cuba. Is this what he envisaged? There was a parade for school children to celebrate a luminary’s birthday with lots of propaganda songs; Patrick even saw a truck with “Propaganda “ written on the side

We returned to Cienfuegos and Giselle’s homestay. Her little brother and mother were away in Colombia obtaining a USA visa, it’s sad that young people have to leave their homes, breaking up a family, to make their way in the world.

We took a tour to Nase , a reserve in the forest with a waterfall and had a swim followed by lunch.

We met some intriguing travellers, a French Canadian lady about our age who was spending three months in Cuba to avoid the harsh winter back home and we kept bumping into a Swiss family with three small children travelling for four months.

Our last two transfers were by Taxi Collectivo and were good experiences; the first was with a vintage American car booming along the empty highway.

Our last day was spent walking along the broad two lane highway looking at the mansions, some derelict and others pristine such as the UK and North Korean embassies which were next door to each other. We also said goodbye to Flavia who had gone out of her way to help us in our travels around Cuba.

So farewell to Cuba, we met some great people who deserve a better standard of living and some hope for the future. They must embrace capitalism within the system like China, allow private enterprise , go full steam ahead with introducing an internet network, encourage entrepreneurship and drag the country into the twenty first century.