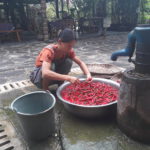 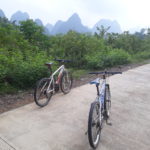 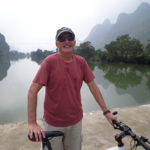 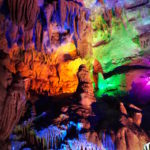 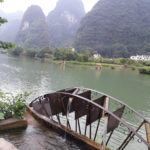 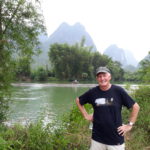 We took a bullet train for 8 hours to Guilian , for long spells it went at over 300 kms per hour and at that speed it’s hard to focus on anything outside. But it’s mysterious for us to see deserted building sites and derelict half ruined houses. Is this all part of a mass relocation project or is it just the on-going Chinese scheme to keep the GDP growth at 7% by creating engineering schemes.
The train stations are built on a model and all look the same and many seem far too big for their purpose. It’s like putting Shanghai station in the middle of a country village.
We stayed a couple of nights in Guilian but I was suffering again from breathing problems so stayed put. We then moved by bus to Yangshuo to a pleasant family run hotel next to the river. This is the land of the karst limestone mountains , at times it looked eerily like the Chinese landscape paintings, misty mountains, peasants tending the rice fields and a slow pace of life. Patrick and I took a bike ride and proceeded to get lost, we were rescued by a local who poled us across the river on his bamboo raft. We called in at an English language school; it would be very idyllic to teach there in the middle of the country.
There’s an element of interference by the Government here, empty state run buses which charge an arm and a leg and police manning road blocks . The local people resent this. It would seem that some people believe because of the one party state the individual has little say in the running of the country. The Government encourages a movement away from the country villages and that genetically engineered crops mean higher food growth and efficient agricultural system. The Government bulldoze their projects through, there’s little or no negotiation on compensation for building, the Government own the land on a 70 year lease.
We met some climbers from Switzerland who had travelled to climb the steep karst limestone.
Because of the increase in costs there are less foreign visitors who can visit other Far Eastern countries at a lower cost. It seems to us that China charges high amounts for some mundane sights , it’s not a cheap destination any more.
There’s an English school here . It would be nice to teach for some time here.
Walking and riding around in the heat and humidity is energy sapping. I need to keep topped up with water and food.
On our last day in China we took the bullet train to Shenzhen, the metro to the border with Hong Kong, went through customs and immigration , which seems strange as it’s now one country and then the MRT to our AirBnB on Hong Kong Island