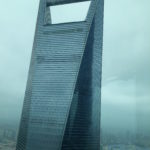 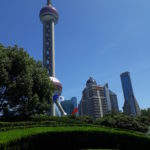 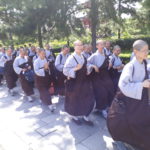 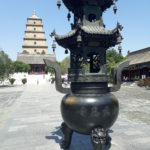 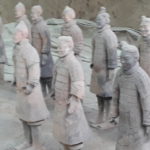 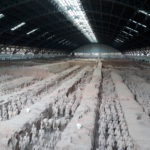 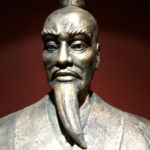 Xian is a complete contrast to Pingyao , row after row of high rises ,swarms of people and ugly. Patrick was not feeling well so Carol and I went in search of some medicine. The system is different here, pharmacies are inside a nearby hospital and this created a good impression. Clean , prompt helpful service despite the language problem , and we got our medicines. Patrick stayed in bed and Carol and I explored the Bell and Drum Towers and the Moslem market and old mosque. The market was frenetic with countless things to eat, men bashing bread, meat, making nuts , pasta and half the time we had no idea what they were doing or selling. We walked back in pouring rain.
The next day we did the sensible thing and hired a car and driver and visited first an archaeological site from 6000 years ago , living very similarly to remote African tribes today. On to the Terracotta Warriors, an astounding place. 3 digs of hundreds of clay soldiers , each individual in build and face together with horses , chariots . The question is why did the Emperor do this , have this whole army buried with him? Was it megalomania or as some think did he expect to carry on in death as in life , inspecting his army ?
The following hot day we went by public bus to the Large Goose Pagoda, another large temple complex in the centre of the city with splendid views from the top of wide avenues in 4 directions.. Here Carol took a tumble and has been hindered since by a badly bruised foot.
We flew to Shanghai , a painless experience except for having to open our checked baggage all for the sake of nail scissors. There’s a lot of mindless beauracracy in China , one becomes a little tired of bag and personal searches on trains, planes , and undergrounds but I suppose it’s better than terrorist bombs.
By now I had succumbed to the Asian bug and spent one day in our rather disappointing Air BnB . However it was well placed and for 2 days we took a hop on and hop off bus around the remarkable city. The Bund is a pedestrian area around the river with a collection of 1920’s well-preserved bank buildings and across the river in the financial district we went up to the 80th floor in a split second to have wondrous views around the city. Shanghai ranks up there as a major city alongside Hong Kong , Singapore and Bangkok and is far more modern and fresh compared to Beijing.
But you have to ask questions about the sustainability of the Chinese miracle.
A short train ride to Hangzhou and a special in a 4 star hotel which was welcome. A day spent by the lake with a boat ride alongside what seemed like a million other persons.
China never ceases to amaze , this town has an expanding metro , an airport and a population of 6 million, just another town in China.
A disappointing aspect of China is the lack of Facebook, Internet, Instagram due to China’s fear of social media. Their ATM’s are also a bit fear making and the vast railway stations with thousands of people milling about, the stations seem to be carbon copies of each other.
If asked the question “ Is it worthwhile to visit China ?” the answer is a definite yes. We’ve seen amazing sights, wonderful foods and witnessed first-hand a country that has transformed itself in 20 years.