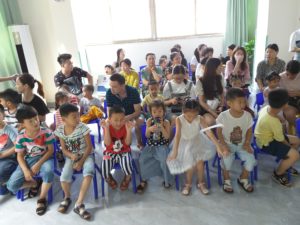 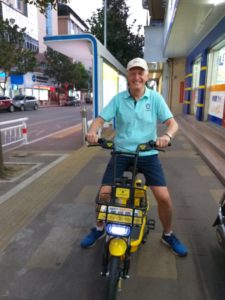 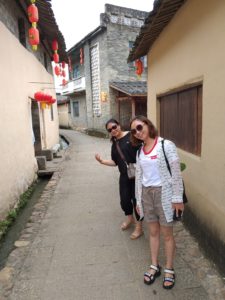 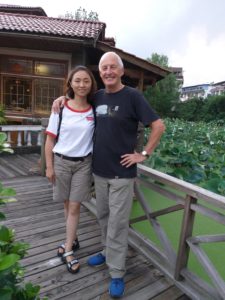 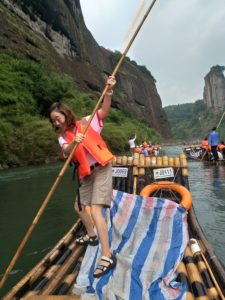 This visit was at the request of Emily who is opening a new English school for children from 3 -10 years old. It’s incredible that the Chinese can educate children at this age, it’s no wonder that they are ruling the World. After a long 12 hour flight to Hong Kong from London and a delay on the on-going flight to Fuchau I arrived to be met by Lily, Emily’s sister, who took me to a hotel. The next morning we did a 3 hour drive to Sonxi City; the first impressions are that this is only the second time Lily has ever driven a motor car and that the road network is amazing but few  cars on them. The area is mountainous and wooded and the climate is very hot at 38C.

The school is neat, clean and well laid out. They did a demo lesson on the first day, I was asked to make a short speech to the prospective parents. The lesson was to 6 children and consisted of songs and games around the colours yellow, green and blue. It was very jolly, lots of high fives and 5 out of the 6 parents signed up. In general the modus operendi of Glynn’s English is to have the kids in a state of excitement from the games. The teacher has to be something of a showman. But they say it works. The teacher has to follow the programme exactly to the letter as prescribed by the company. So you have to believe in their system.

The apartment is next door which I’m sharing with Max, one of the teachers. It’s basic but has air conditioning and you feel like part of the community. This morning I looked out of the window and watched people doing their slow motion exercising and nearby is a running track for use of the general public. It’s the usual mixture of small businesses haphazardly working side by side on the street. It seems to be normal to watch your neighbours brushing their teeth and listening to their conversations in the echoing building. The people next door leave their door open, they have a 90+ year old father who looks quite senile and they leave a bowl of wriggling eels outside to prop open the door. I’m woken up each morning by a truck spraying water on the street at 5.45 am together with a merry tinkling song which drives me mad.

The Chinese believe in fast food, but not of the McDonalds variety. We went to this restaurant, Emily ordered on her phone, the food started coming immediately and as with all Chinese restaurants people started tucking in straight away. The bill was paid from the phone and we were out of there in 45 minutes. I like Chinese food, not a lot of meat and plenty of vegetables cooked with lots of spices. Sometimes you don’t know what you’re eating and trust that it’s not toad or chicken feet.

I realise that I’m the token Englishman here; the Chinese believe that only the English can teach English correctly. Perhaps they would do better if they had a cardboard cut-out of James Bond to wheel out.

At night the town is humming, shops of all kinds open, men repairing motor bikes at 10.00 pm, women’s hairdressers, with lots of fruit and veg being sold, men welding intricate structures on the street, sawing wood and constructing tables. In one restaurant we visited the guys were feasting on a cows head, on the table. Chinese men tend to be loud and assertive; when they walk into a room they shout and act as if they own the place and smoke cigarettes. In general the women are small and plump and the men bigger and plumper, not surprising the amount of food they knock back. When she gets on her scooter Emily wears a full superwoman visor, a jacket and then a protective piece of fabric across the front over the bike to stop any sun from making her brown. China is basically a cashless society, everyone pays from their phones. The town itself is very functional, not very pretty, but you can find all you need. In the supermarket I found live terrapins, toads, shrimps together with chicken feet. Businesses spill out onto the street. One morning I woke up to a guy butchering and selling a pig outside.

We went for a drive to the country and picked grapes and passion fruit and had lunch at a restaurant with a garden;  the country is pretty, they grow various products as well, bamboo, rice and lots of specialities.

The next morning, before it got too hot, I went for an early morning walk up a nearby hill, this was peaceful and tranquil with bird song and views of the city and on the other side Chinese farms and land; nice to have this on my doorstep.

Everybody reads that China is a police state, I don’t see much evidence of that except that one cannot access Google, Facebook, Instagram and other news from overseas is censored and not reachable on line. This leaves one feeling isolated with little news from outside .When we were out in a tourist village one guy definitely took a photo of me although he was pretending to take photos of the building. Emily says there is an army base nearby. They have face recognition so I’m sure I was being checked on. But day to day living is like anywhere else, people get on with their lives and the great majority just want to achieve a good standard of living for themselves and their family. China has a communist political system and a capitalist economic system; it’s a pity that Cuba hasn’t adopted the same system. Everyone has an electric scooter, starting at R4000 a go for getting round town.  If I was to live here I would buy one, also a bicycle for long rides, join a gym and attempt to learn Mandarin.

We went away for a weekend to Wuyi , about an hour away. It reminds me of Yangshao , it’s much more up market than Sangxi and is very much a tourist town although it has a University and two English language schools. In the afternoon we slogged it up to the top of a mountain in the boiling heat but got a tremendous view of the hills with tea growing and it was nice to be away from the crowds. We had a couple of tea tastings , mainly red bush tea and then in the evening went to spectacular son et lumiere show set outdoors with the audience revolving around a 360 stage using the mountains and the river as part of the set and a cast of hundreds. It was stunning.

The next morning early we went for a bamboo rafting trip down the river along with hundreds of other rafts but it was really splendid, quietly being poled along through gorges and towering rock formations. A walk through the town and a drive to a traditional village and looked at water lilies being grown around there followed with a lunch consisting of eels and snails. I decided to forgo the pleasure. Although I was told that I would see foreigners there I still didn’t see any and only caught a glimpse of a foreigner jogging down the road with his Chinese girl friend.

We picked up Max from the high speed railway station, a huge edifice plonked in the middle of nowhere. It takes 8.5 hours to get to Beijijng.

I’m a bit of a celebrity being the only foreigner in the city. Customers look at me with open mouths and some talk with me in struggling English. Guys accost me in restaurants for photos and general chit chat. By the end of the trip many mothers were greeting me on the street, ‘Hello Roger “

According to Emily most people are not happy in China. They have to educate their children; this is very competitive and important for them and can lead to moving to cities that have good schools and teachers and even sending to International schools to improve their English. They pay above and beyond for extra schooling such as English. Schooling is free at Government schools but not at private schools. At the same time they have to support their elderly parents, which is expected of them. They won’t think about nursing homes. Medical care is not free and to have an operation it costs a lot of money. It seems you pay for what you get in China, rather like South Africa. So all in all they are under pressure from all sides.

Living here is not easy. After a while one misses one’s food , things like coffee are in short supply , the one coffee shop has no coffee or the machine is broken , its noisy, the beds are hard , language is a big problem , it’s hot and sleeping has been a problem for me. I wouldn’t by choice live here.

We hired one of the electric scooters which have sprung up over the town. Just pay for it from your phone with We Chat and away you go, you don’t need a licence. When you’ve finished just drop it off, cancel from your phone and it’s done.

One evening I was invited by Abby , one of the teachers , to dinner with her and her husband and parents. I was actually overwhelmed by the hospitality and kindness shown to me. It was the usual many course meal with plenty of mussels and other dishes and then after a walk lots of tea was drunk. Abby’s wedding photos were astonishing , a long train on her wedding dress and a long red dress, but it was the photos of her face which amazed me , completely different , almost impossible to recognise her , even the shape of her face was changed.

So eventually my time in China came to an end. A 3 hour drive to Fujau , an overnight stay in the airport hotel , a short flight to a riot torn Hong Kong and then a 12 hour flight to London.

Living in a small town in China without any contact with other Europeans and little news is quite isolating. I found the staff at the school were very friendly , Emily went out of her way to make my stay a pleasant one but after a while I found the food too strange and exotic and only ate at a noodle bar where things were quite bland. Chinese table manners are appalling as well as their hawking spitting and farting. So I was glad to leave and don’t have any plans to revisit although it was a memorable experience.