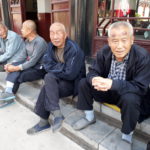 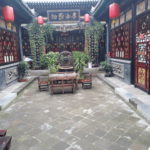 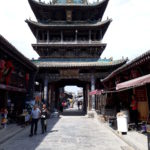 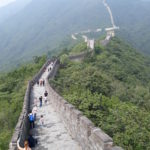 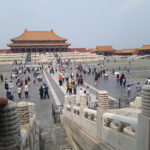 To continue our journey we flew from Kuala Lumpur to Beijing via Air Asia. All went well until we drew cash from an ATM. We either were given counterfeit money from the ATM or had good money swapped by a taxi driver later. Our hotel was close to Tiananmen Square and the Forbidden City both of which cover a huge area. Carol kept saying that it’s a public holiday but that wasn’t the case, the number of people visiting these sites is enormous , estimates 80,000 per day. We filed past Mao’s body in the mausoleum being urged on all the time by the overabundance of police and minders. People laid flowers, some wept and there was an overall feeling of reverence. From there we walked through the Forbidden City , the scale of which is enormous. The next day we took a trip to the Great Wall and walked and climbed marvelling at the fantastic achievement that made this possible. We stopped at the Ming tombs and braved the hectic traffic back to the city . Our driver took a shortcut to avoid the snarled traffic and got the bus stuck in an alleyway. A shouting woman ran out and blocked us with a bicycle and stones but we gingerly reversed and turned around. It was nice to meet some intrepid travellers, Barbara a 70 + American who just travelled wherever she felt like it following the sun or her whim, two free spirited Belgian girls and 3 Filipino girls who live in Singapore. On our last day in Beijing we took the metro to the Summer Palace which is beautifully situated next to a lake but rather spoilt by hordes of people. But what does one expect , China has 1.4 billion people and over 20 million living in Beijing. In the evenings we walked the hutongs ( alleyways ) around the hotel into the poorer residential areas .
Our impressions of Beijing are that it is a huge city with wide clogged roads and highways, magnificent architecture and history, miles and miles of high rise buildings . In general the Chinese are not friendly to foreigners and overcharge and not particularly honest , there’s a huge security presence. Very few smiles are handed out and the people appear gruff and confrontational.
Beijing West is a frantic station with masses of people but we found our way to the huge waiting room for our train which was somewhat like being in an airport. The train itself was impressive, 16 coaches long, comfortable and new and reaches speeds of 300 kilometers/hour. A good way to travel.
Pingyao is an old walled town, the first morning Patrick and I ran the circumference 6.2 kms and saw one guy doing martial exercises with a sword, groups of women doing aerobics and people singing . Inside the walls the town consists of small traditional houses converted into shops , restaurants, hotels , no cars and old museums and temples to view. So we spent the days and evenings strolling around and eating and people watching. In fact both in China and Malaysia we have covered a lot of ground. The food is divine noodles soaked in vinegar, pot roast beef, green tasty vegetables and other pork or chicken dishes. We have found that an evening meal with drinks costs the same as 3 cappuccinos. So I think that in future we will be giving our coffee breaks a miss.
Our hotel is in traditional style with a huge bed that could sleep 6 but a hard mattress and a pillow filled with rice. So Patrick and I wake up wrecked with pains and sores and walk around like old men until we loosen up.
I would recommend Pingyao to anyone to visit when in China. The people are far more friendly and helpful than Beijing.
Some difficulties, no Google and Facebook , no one wants to sell us a SIM card, no pharmacies , worrisome ATMs and very little English spoken. Actually the latter leads to some fun situations with all sorts of people being hauled in to translate and explain the dishes.