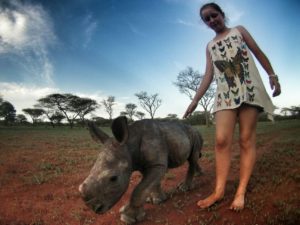 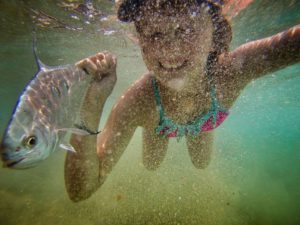 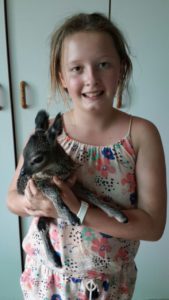 I have a very unusual grand-daughter Tamsin. She doesn’t think she’s unusual because her life has always been the same since she was born but other people shake their heads in wonder at the things she has experienced in her 12 years of life.

She has lived all her life at Phinda Game Reserve in Zululand South Africa where her parents live and work. Initially she went to a pre-primary school for children of employees but now she goes to Hluluwe Primary School. To get there each day the children drive 40 minutes through the game reserve and Tamsin told me that on one day she saw the big 5, that’s lion, leopard, elephant , rhino and buffalo; a bit different from most people’s drive to school.

The staff live in an area next to the airfield and particularly at night it’s best to keep your eyes open and tread warily. Lions march down the road past the houses and elephants come regularly into the garden to drink from the bird bath.

From an early stage Tamsin has accompanied her Dad in carrying out his tasks as Conservation Manager. This means she’s been there when they’ve darted elephants, leopards and lions to fit collars, rhinos to remove horns and helped out when the vet has cleaned up wounds on injured animals. She has no problem to swab out maggots from an infected leg or stomach. These operations don’t always go strictly to plan, on one occasion a partly anaesthetised elephant got angry and turned over the truck in front of where she and her mother were watching , injuring and trapping the driver.

Flying in helicopters and planes to spot animals from the air is no big deal for Tamsin .

She recently went with Simon to Malawi to relocate antelope from one reserve to another and in the near future she’s going to a private island off the coast of Zanzibar to do something similar.

She is also responsible for rearing and feeding orphaned antelopes which are kept in her Dad’s garden. This includes bottle feeding them every 4 hours when they are young.

Of course we all believe that she’ll follow in Dad’s footsteps and pursue a career in conservation. But that’s not a given, who knows Tamsin is just as likely to become a fashion designer or an accountant. It’s going to be interesting to see.